A voyage of nostalgia and elegance!

– Circa 100 classic boats, sailing and motor, and 12’ Dinghies in the harbour!

– Three 15M IR yachts get the ball rolling this afternoon

Until Saturday, Yacht Club de Monaco is celebrating with style and humour the singular spirit of good living at sea, of yachting in the noblest meaning of the word at the 15th Monaco Classic Week. Around 100 classics, vintage motorboats and period motor-yachts, as well as sailing yachts and a fleet of 12’ Dinghies will be showing off their impeccable varnishes, woods and gleaming brass ashore and at sea in the yachting spirit that reigned in the last century, a certain Art de Vivre la Mer where style, elegance and friendship unite over a hundred years of maritime expertise – sailing, motor and even in the air. Famous for its Yacht Club and Formula 1 Grand Prix Monaco it seems only natural that it should also have been the cradle of early seaplanes. A glimpse of history with a Cessna 305 from Italy landing in Monaco’s harbour tomorrow morning, a reminder of the vital contribution to aviation made by the visionary Prince Albert I at the turn of the last century, a man who invested in new modes of travel, be they car, motorboats or aircraft. It was in March 1911 in Monaco that the seaplane designed by Henri Fabre and piloted by Jean Bécue made its first two flights. 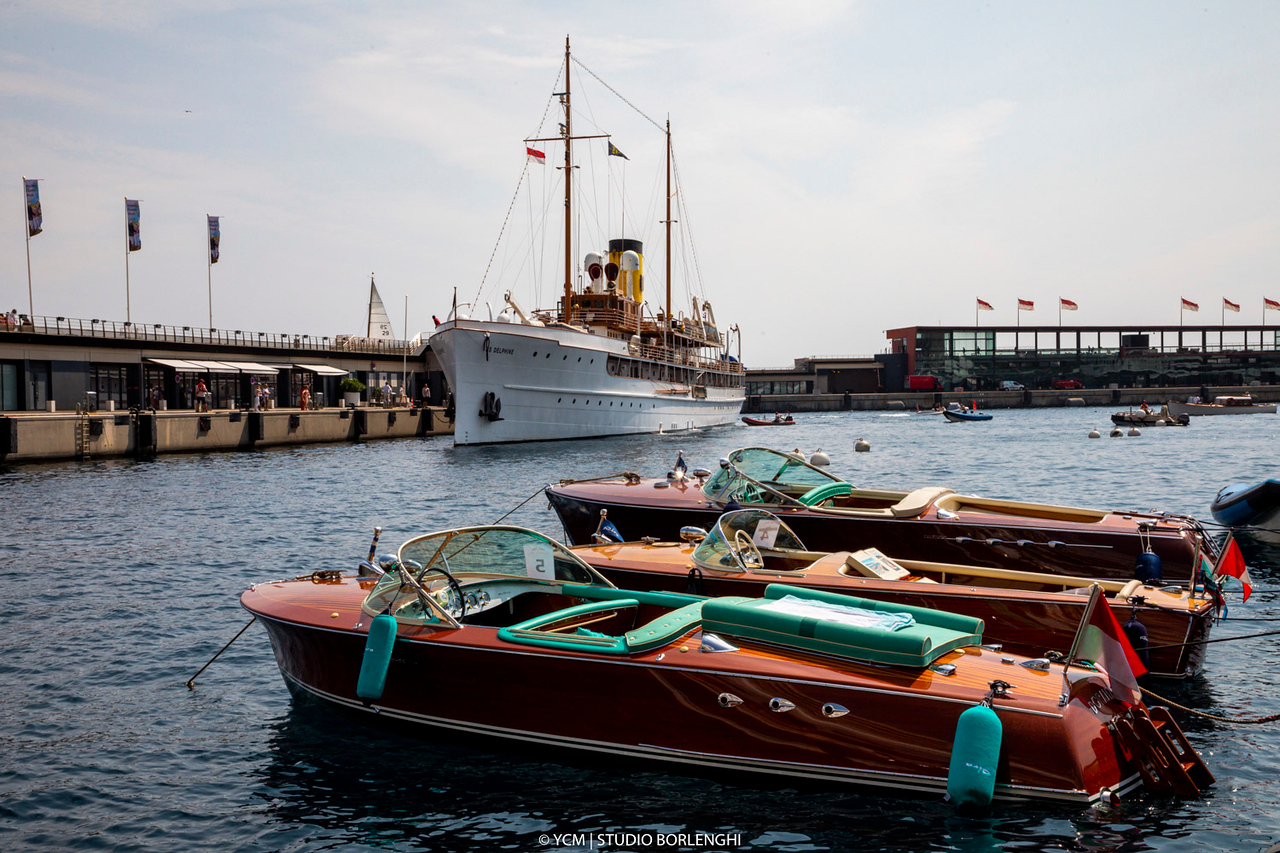 Launched in 1995, Monaco Classic Week, a unique gathering of classic boats, sail and motor, and 12’ Dinghies brings back all the elegance and colour of a bygone era, when the Principality at the turn of the 20th century was a centre of excellence and innovation in terms of motorboat development. The spectacle continues until Saturday ashore and at sea. While classic yachts, the 15M IR class and 12’ Dinghy class are racing in the bay, motorboat enthusiasts will be taking part in regularity and maneuverability challenges.

Thirty-three classic yachts, nine motor yachts, 17 motorboats (10 Rivas, three Chris Crafts, two Albatross boats, one Swiss craft and one Templer Corsier) and a 20-strong fleet in the 12’ Dinghy class will be in the harbour. Although travel restrictions have forced some owners to cancel their usual visit to Monaco for this event, it is still a breathtaking display. Schooners, cutters, a gunter-rig, yawls and ketches, Bermudan and gaff from the most prestigious and emblematic designers from a century of naval architecture will be represented at the foot of the Yacht Club de Monaco – Anker, Nicholson, Fife, Olin Stephens, Sparkman, Mylne, Camatte and Potter to name a few. Their confrontations under full sail in the shadow of the Oceanographic Museum will be one of the many wonders of the 15th Monaco Classic Week.

Eleven period motor-yachts are gracing the scene with their presence, notably Blue Bird (1937) and Istros (1954), recent winner of the Super Yacht Award 2021, vying for attention alongside other renowned vessels like SS Delphine who is celebrating her 100th anniversary. Built in Detroit in 1921 for Horace Dodge, she is one of the last steam-yachts still operating, having been totally renovated in 2003 in Belgium. With a length overall of 79m, she has had many lives including serving as the flagship of the Chief of Staff in the US Navy, Admiral Ernest King, under the name Dauntless.

Beyond the sporting aspect and results, Monaco Classic Week keeps alive a rare and exclusive flame which is a passion for beautiful vessels on the water. A range of prizes encourage the involvement and total commitment of owners to preserve their boats, all legacies of a timeless marine culture.

The coveted La Belle Classe Restoration Prize recognises the quality of the renovation of boats that are often over a hundred years old. For this 15th edition, the Jury is presided by Sir Robin Knox-Johnston and comprises experts in yachting history who will inspect every single boat to assess the quality of their restoration. Marks are based on respect for the original plans, materials used in the boats’ construction and the expertise and knowhow of those who restored them. The individual histories of the boats and their owners are also taken into account. “There are many criteria to consider when choosing the winner,” explains Sir Robin Knox-Johnston, “every time it’s different. We look at the boat’s condition, her history, how she has been preserved, and the crew’s enthusiasm for the boat – that’s important! The atmosphere on board!  But at the end of the day, the answer lies in our hearts. We see a boat and say to ourselves: “My God I love that boat!” And that’s difficult to explain”.

The Elegance Parade also has a Jury assessing etiquette, style and respect for the way of life and of course good behaviour at sea, all in a very festive spirit where the humour and atmosphere of the Belle Epoque period plays its part.

A blend of these two competitions, the Monaco Classic Week Trophy encompasses all the criteria of restoration and elegance, to which is added that “love at first sight” element for the spirit that has reigned over the life, maintenance and restoration of the boat.

Outstanding exhibition of works from the YCM collections opens

In the build-up to the centenary anniversary of the death of Prince Albert I next year, the Comité Albert Ier-2022 has organised an exhibition of lithographs, posters, photographs, restored postcards, and trophies and medals from the period, all linked to the powerboat meetings of the past that started in 1904.  Some 60 items have been taken out of storage and meticulously restored over a period of six months for the occasion and are on display to the public for the first time, a chance to discover signatures of major artists of the time.

A short film on the restoration campaign and an interactive App on a touch tablet complete this exploration that is part of a rich and varied programme from the Comité Albert Ier-2022, all open to the public. 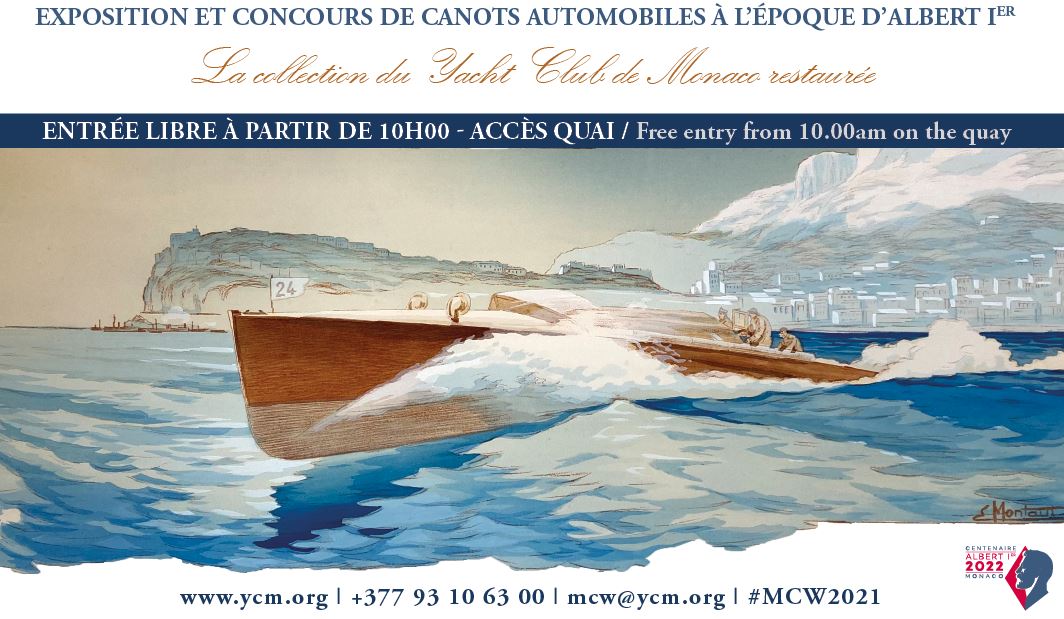 Sailors have an appetite and taste for the good life, and knowing how to live well at sea means combining all the pleasures of fine dining with the joys of sailing. The Chefs Competition offers owners a chance to showcase the talents of their chefs who have to devise a menu for guests in a certain amount of time from a set basket of ingredients. Presided by the three-Michelin star Chef Mauro Colagreco, voted Best Chef 2020 by his peers, and supervised by Simon Ganache, Executive Chef of banquets at the Yacht Club de Monaco, the results will be assessed by a jury of experts including Frédéric Ramos, Executive Chef at the Novotel Monte-Carlo, David Alves, Executive Chef of Joël Robuchon International, and Alexis de Labarthe – Head of Prestige at Glenmorangie.

A war hero in Monaco

In1938, Sir Malcolm Campbell launched a yacht called Blue Bird IV. Designed by G.L. Watson, she was intended for the high seas as Sir Malcolm had planned to go hunting for treasure in the Pacific Cocos Islands. Blue Bird never reached the Pacific as she was requisitioned in 1940 to help in the evacuation of British expeditionary forces from Dunkirk as part of Operation Dynamo.

Wednesday saw the first warm-up races ready for tomorrow in excellent wind and sea conditions, reliving the magic of the three gaff cutters racing together. The English The Lady Anne nailed her colours to the mast winning both warm-up races. Tuiga, and her mixed crew which included Adriana Karembeu, and Mariska shared the honours.