Down to the wire!

Sunday 12th December. Fifty one international teams, 15 nations and three days of racing were on the menu for Act II of the 2021/2022 Monaco Sportsboat Winter Series. Launched 2013, these monthly regattas have become established as events not to be missed for many high level teams, with the added spice of familiarising themselves with the race area of the upcoming J/70 World Championship (14-22 October 2022) organised by Yacht Club de Monaco.

Stubborn to the end

While some were experiencing Monaco bay’s particularities for the first time, others seized the opportunity to perfect team coordination during the five races completed in a moderate southwesterly flow. The first races quickly set the pace and outcome for the regatta, with YCM’s Giangiacomo Serena di Lapigio (G-Spot) topping the provisional ranking on the Friday, followed closely by the Russians on Tenzor Sport and Ludovico Fassitelli (Junda). The game of musical chairs began the next day as the Russian team led by Milena Nikitina muscled in, winning the day’s one race to move into 1st place.

On Sunday, the southwesterly breeze was back in force to produce some superb tussles between Découvertes, Tenzor Sport and G-Spot. After a clean start under the U flag, competitors pulled out all the stops in a battle won by Tenzor Sport, putting them at the top followed by G-Spot then the Moscow team on Dolce Vita. YCM’s Ludovico Fassitelli (Junda) was 4th. In the Corinthian (amateurs) category, the Swiss on Jerry beat their compatriots on Jalla jalla who in turn pipped the Germans on Wikiwiki to the post.

Having won Act 1, Ludovico Fassitelli (Junda) maintains his lead in the provisional ranking for this Winter Series, five small points ahead of his pursuers: the Russians on Tenzor Sport and Dolce Vita. In the Corinthian category, YCM’s Cesare Gabasio (Tinnj70) is lying 2nd just a point behind the Irish on Wild Card after ten races. 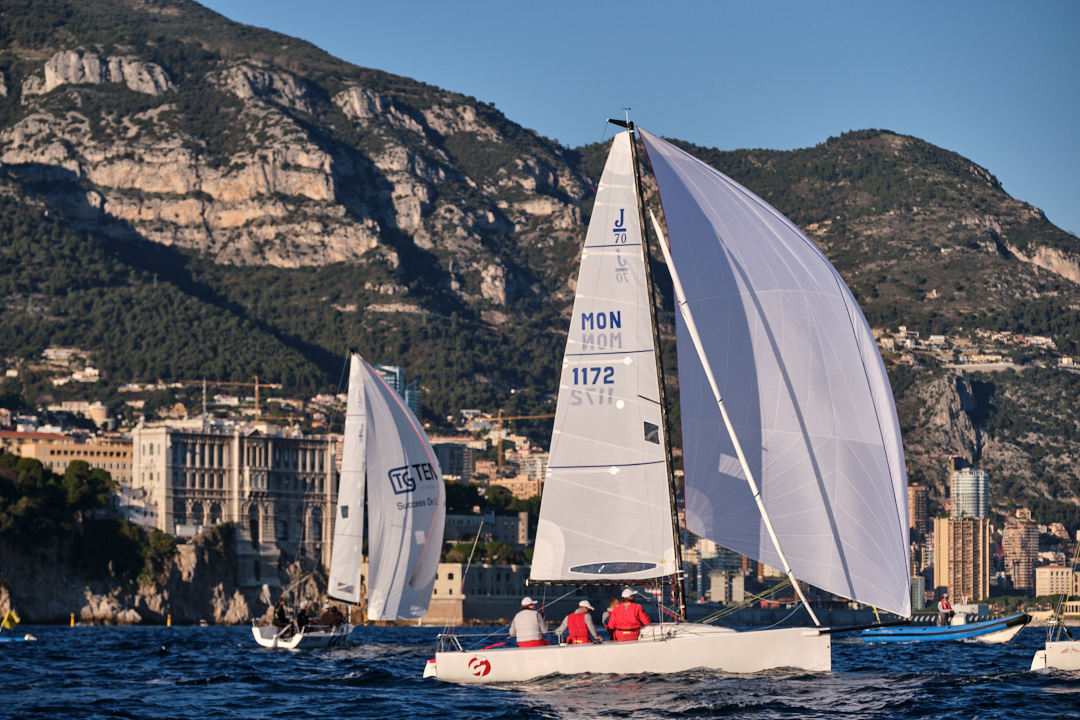 Winning is of course the common denominator among talented sailors from the sailing world, with people like the Australian 470 virtuoso Will Ryan, newly crowned Olympic champion in Tokyo, and Fin expert Michele Paoletti pointing the way to this being an unprecedented season.

For Monegasque teams, this Monaco Sportsboat Winter Series is their qualifier for the J/70 World Championship being organised for the first time by YCM in partnership with FxPro. Also new, is that Act III of this Winter Series (3-6 February 2022) will also count towards the new Tenzor International Cup, a four-event Russian circuit now in its second year. Meanwhile, registrations for the 38th Primo Cup-Trophée Credit Suisse, the fourth and final act of the Monaco Sportsboat Winter Series (3-6 March 2022), are already open.