Saturday 9th July 2022. History is repeating itself; only the characters change. Nearly 120 years after the first powerboat meetings, Monaco is again key player and spectator of ground-breaking innovations with the 9th Monaco Energy Boat Challenge. The big meeting for alternative propulsion systems, it’s organised under the aegis of the collective Monaco, Capital of Advanced Yachting umbrella brand by Yacht Club de Monaco in partnership with Prince Albert II of Monaco Foundation, and the support of Credit Suisse, BMW and SBM Offshore, as well as the Oceanco shipyard.

“If Monaco wants to position itself at the forefront of yachting, the Principality must support its transformation. It is by combining our efforts and sharing progress on technology that we will achieve our goal,” said YCM President HSH Prince Albert II of Monaco who came to meet the 38 teams and 36 exhibitors here this week at the Yacht Club de Monaco alongside the explorer Mike Horn.

YCM Vice-President Pierre Casiraghi, sailor and founder of Team Malizia, also recalled the importance of hosting this type of meeting in Monaco as “essential for the future of yachting as it allows us all to develop and exchange ideas”. A sentiment shared by YCM General Secretary Bernard d’Alessandri: “The Monaco Energy Boat Challenge is quite a rare opportunity as it brings professionals and engineering students from all over the world together, with everyone exchanging knowledge. It is without doubt one of the best ways to contribute to the coming transition. Monaco has been a yachting mecca since the start. We have a responsibility to strive towards a more eco-responsible approach: for our planet, for the oceans and for the new generation”.

It was therefore all about sharing ideas in open source, confrontations on the sea, debates, a Job Forum to bring young talents together with professionals, and some new features. A look back at a 9th edition that lived up to expectations. 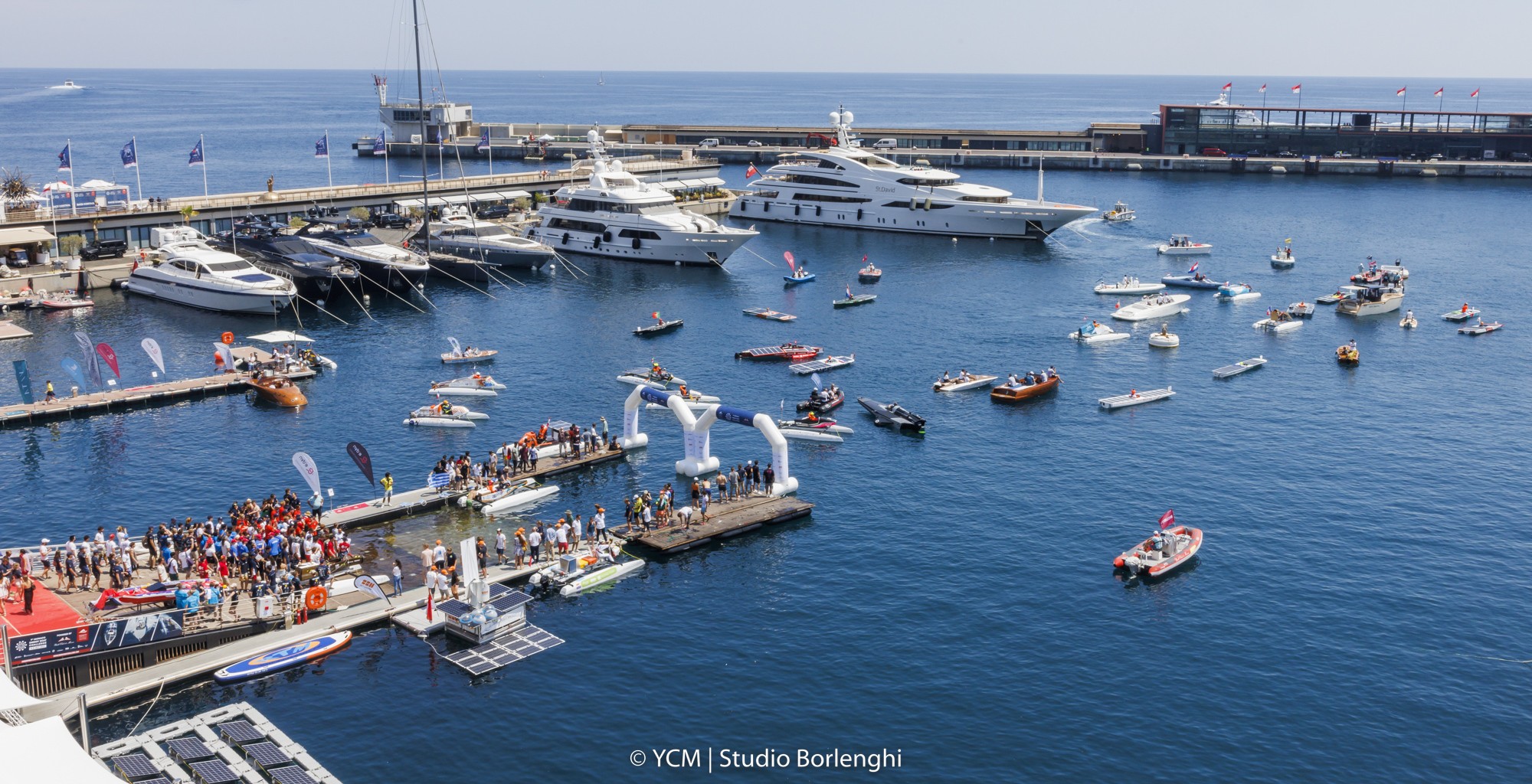 Thirty-eight teams (21 nations) including 27 universities divided into three categories (Solar, Energy and Open Sea Class) were here this year, including newcomers like the Indians (Sea Sakhti) from Kumaraguru College of Technology, supported by the Indian sailor, Commander Abhilash Tomy: “I’m so proud to see my country represented at this meeting. India supports new energy sources, particularly mobility-related. Many initiatives focus on the automobile industry but not yet in the yachting domain.  I hope these students will return to India with their heads full of ideas because at least 10% of fishing boats in India could use electric propulsion for example”. It was also the first time an Indian team had taken part in an international powerboat event. Peru, Greece, China, Indonesia and Canada also made the trip, each determined to present their solution and prototype. All had a chance to compete against each other on the sea and share knowledge every day at the Tech Talks in open source.

A laboratory of innovation apart from the competitive element, the Monaco Energy Boat Challenge encourages teams to assist each other. Victims of engine and battery failure, the Canadians and Peruvians helped each other by lending spare parts. As for the Italians from Uniboat, winners in 2021, they stepped in to help the Canadians get their boat back on track, a gesture that will not be forgotten: “An atmosphere of solidarity and mutual aid was everywhere on the quays. Uniboat helped us solve some minor technical issues. We are hugely grateful for the time they spent and the knowledge they passed on. We can confirm – there is strength in numbers! This enriching experience will remain etched in our memories for always!” said a team spokesman. 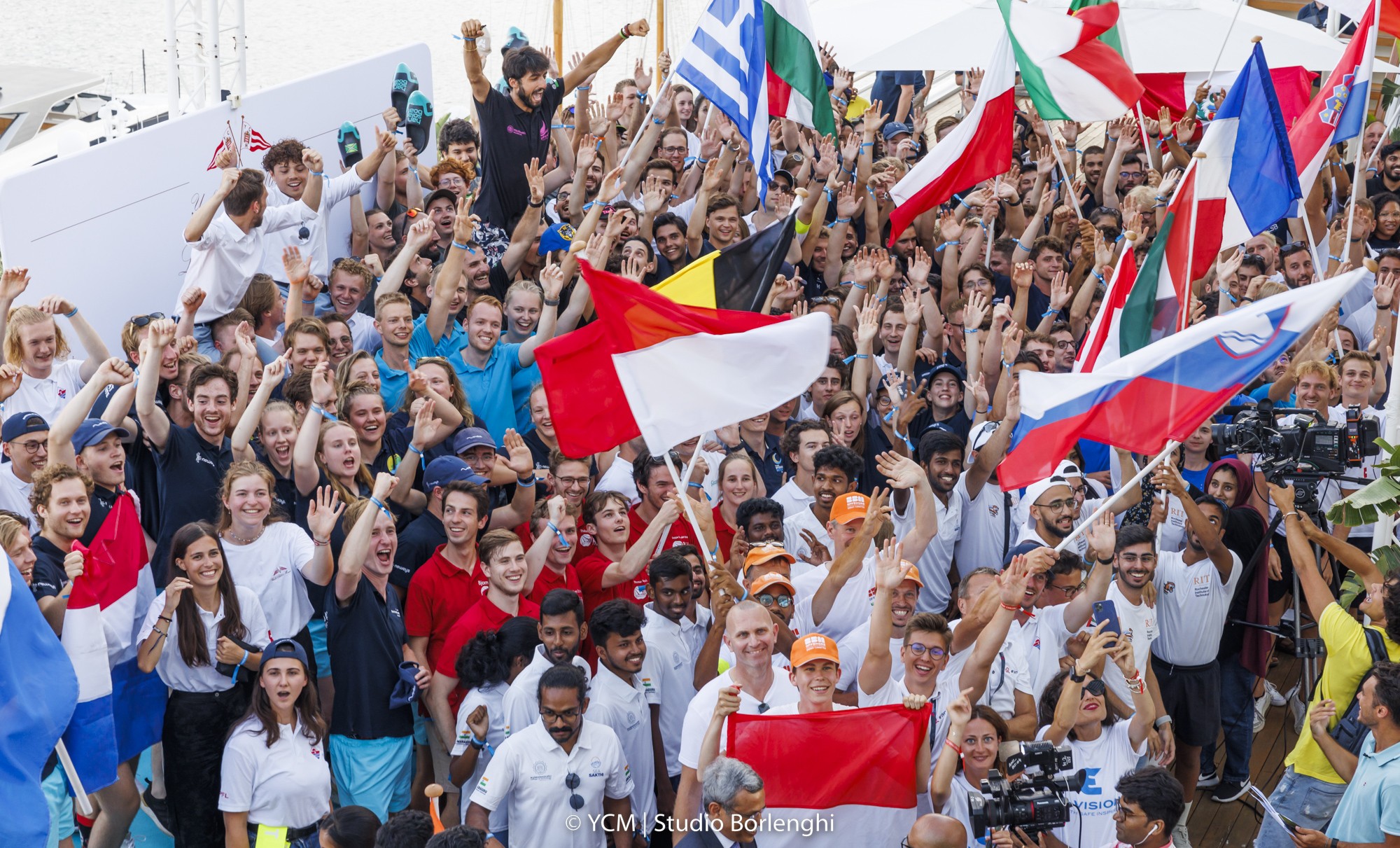 In the end, some designs reflected developments before and after Covid. Nearly 50% of teams had adapted their projects to minimise transport costs and their environmental footprint, putting all their ingenuity to the test on boats that can be dismantled, foldable and for some even able to be brought in their suitcases like the Dubai Sailing Tigers team, while the Canadians with Exocet opted for another solution: “We had to pack the parts in a minimum of space as everything was coming by air. Finally, it all went into a box about 1.5m long,” explains Olivier Tessier, the team’s mechanical engineer.

2022 vintage of all possibilities

The Innovation Prize went to the Portuguese Técnico Solar Boat (Energy Class) team. “As a result of work on hydrogen, we saw real innovations in this field, notably with Técnico Solar Boat who have developed a system for dehumidifying hydrogen and gases that pass through the fuel cell,” says International Jury President, Jérémie Lagarrigue, CEO of EODev. “Other striking innovations highlight eco-design using bamboo, linen fibre and recycled PET on engines that are still packed with technology. Students are therefore developing skills required for tomorrow’s yachting with life cycle analyses that will guide the design of future vessels”. Advances have also been made on propellers with the appearance of winglets on ever-more efficient profiles delivering nearly 80% efficiency against the current 50% in the industry.

In the Energy Class (where one-design hulls are supplied by YCM, and teams choose their zero-emission energy solution) the quantity allowed on board was doubled this year to 10kWh. A factor that dramatically changed the races, as boats were undeniably faster. In general, teams worked on already existing projects, improving and reinforcing them to raise the level up a notch for this 9th edition. 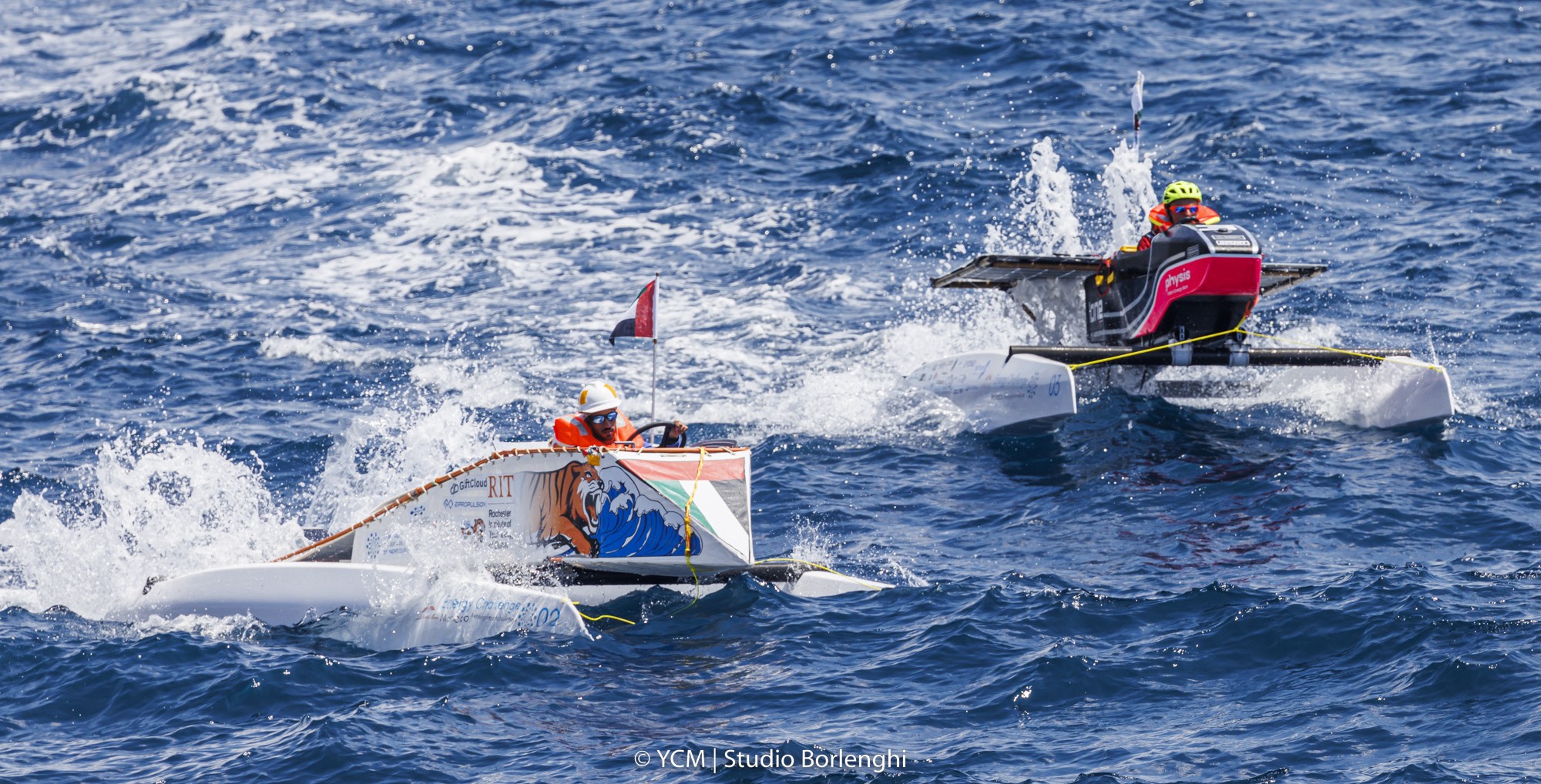 Alongside those competing, 36 exhibitors descended on the Principality to showcase their progress. That meant Monaco’s bay hosted a record 50 boats on the water! Across the Village, these professionals shed light on their projects like the Monaco-based company SBM Offshore taking part for the fourth year in a row. Their pontoon producing green hydrogen from renewable energy was moored in the YCM Marina with, new this year, the addition of floating photovoltaic panels. The hydrogen produced was used by the SBM E-Racing Team to refuel their boat competing in the Energy Class. It’s only one step away from competitor to exhibitor, as all eight teams registered in the Open Sea Class (boats on or about to enter the market) were exhibitors.

More generally, the Paddocks were the setting for a number of new technologies, such as the flexible Solar Cloth covering two structures with foldable photovoltaic panels. Referenced in the Monaco Smart & Sustainable Marina E-Catalogue, the idea is to encourage boats to use this technology when at anchor or moored rather than turn on the generator to avoid pollution, noise and vibration disturbance. For this event, electricity produced was fed back into YCM’s grid in a partnership with local gas and electricity supplier, SMEG. As for hydrogen, EODev presented a 100kVA electro-hydrogen zero-emission GEH2 generator supplying off-grid electricity like any generator but with zero pollution. 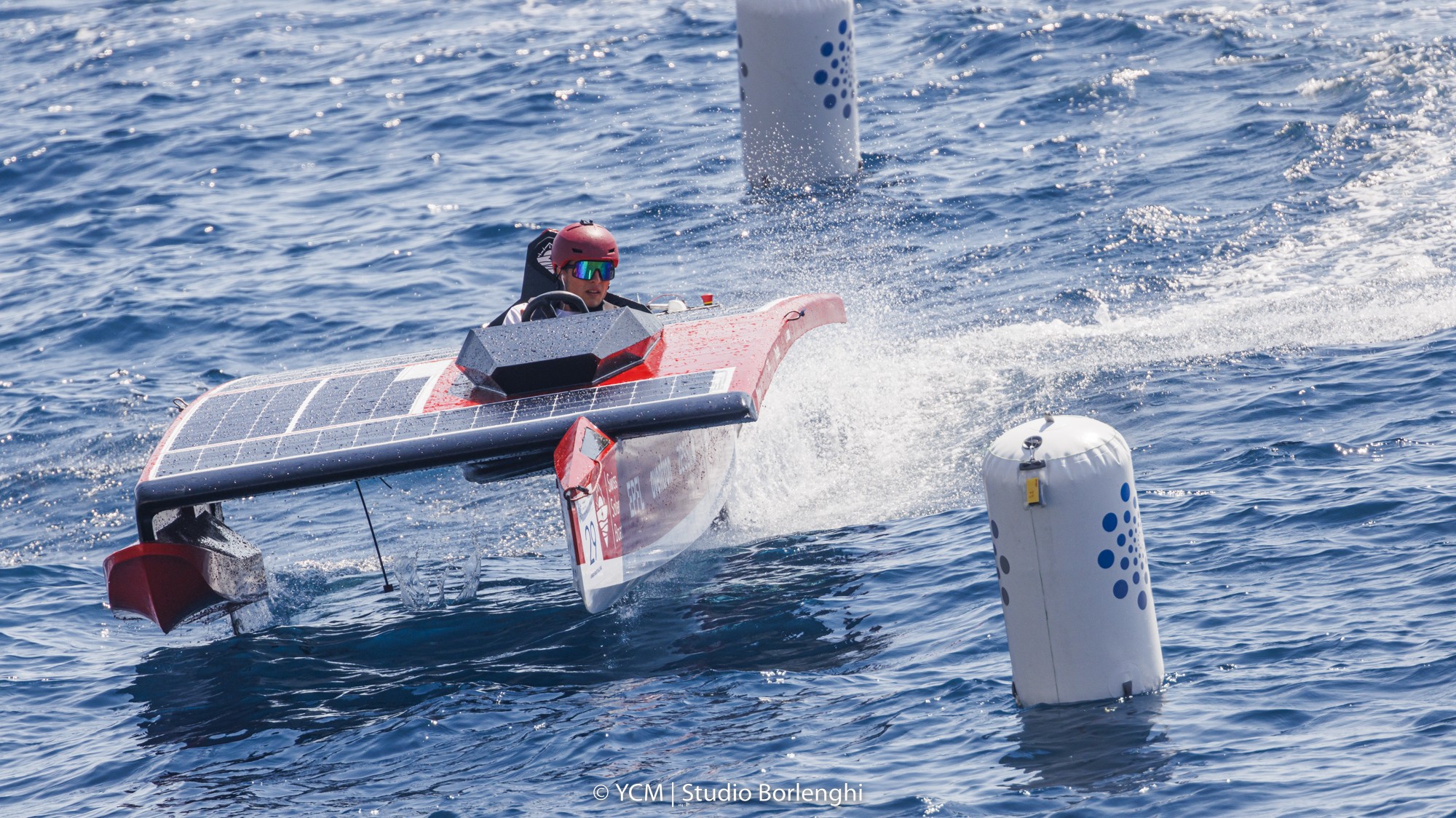 Expert panel discussions – find all the talks from the conferences here

Ashore, attention focused on speakers at the conference entitled ‘Energy Transition in Yachting: Opportunities & Limits’. Highlighting the issues related to renewable and alternative energy sources, their evolution and potential in the future, the meeting also tackled the issue of onboard production while envisaging recreational boats as a vast experimentation field where progress made is contributing to the maritime sector’s metamorphosis.

The next day, experts were to be found at the 3rd Monaco Hydrogen Working Group Round Table entitled ‘Unlocking hydrogen barriers in the maritime sector: port regulations and economic viability of projects’. Organised in partnership with Monaco’s Energy Transition Mission, the Prince Albert II of Monaco Foundation and Yacht Club de Monaco, it was a chance to take stock of the hydrogen market, its regulations and finance options.

Races at sea and in the virtual world

At the cutting edge of new propulsion systems, the Monaco Energy Boat Challenge is embracing the digital world with a new communications platform, a 3D virtual reality space, launched by Frédéric Genta, Monaco’s Country Chief Officer for the Digital Transition and Attractiveness: “Monaco is modern. It must develop its economy by going digital. The Principality brings together so many promising sectors but to continue to grow it must be accompanied by this technology. Digital technology is a big plus for the economy”. Enabling the event to be accessible to the maximum number of experts and enthusiasts remotely, the platform employs UNREAL 5, the engine behind many online video games, the big advantage being that it provides the most immersive and realistic experience.

Also on this platform is the simulator video game designed by students who participated in previous events, the aim being to give everyone a chance to experience what it’s like to race a solar powered boat. 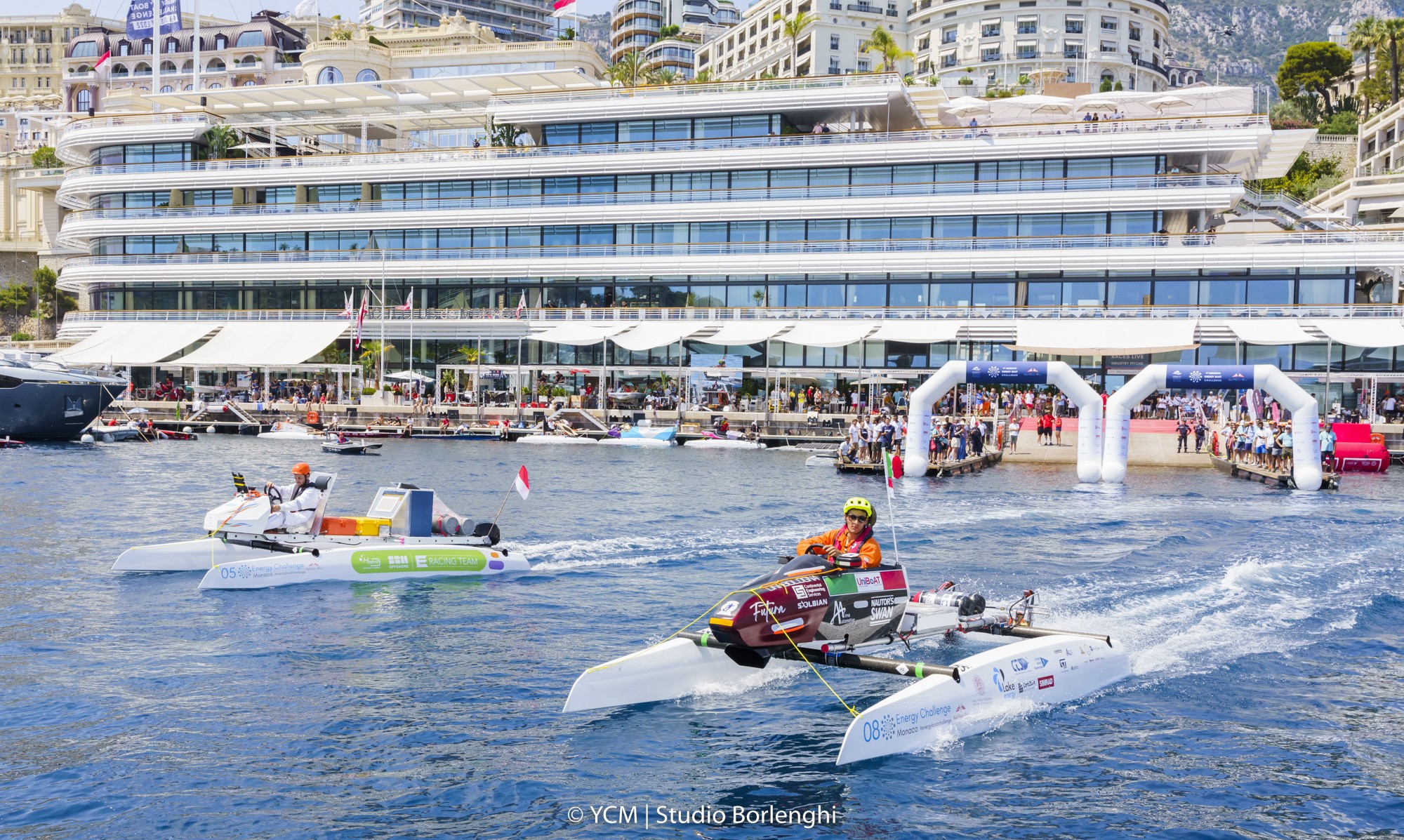 The Monaco Energy Boat Challenge is therefore synonymous with progress and performance as everyone cherishes the idea of winning their category. In the Energy Class, the Italians on UniBoat (Italy) won, while in the Solar Class, the Sunflare Solar Team (Netherlands) did it again after their victory in 2021. In the Open Sea Class, it was the Brits from Vita Lion who walked away with this trophy.

– New Generation Prize for the team whose project is not only the most feasible but also new to the market: Aquon (Switzerland)

– Eco-conception Prize for the project having the greatest eco-friendly impact over the life of the project: Physis PEB – Politecnico di Milano (Italy)

– Coup de Cœur for the exhibitor whose project garnered the most votes from all the Jury members: Simrad/Navico (Norway)

Everyone is already looking ahead to next year and the 10th Monaco Energy Boat Challenge to be held 5-8 July 2023. Between now and then, yachting professionals will gather for the 2nd Monaco Smart & Sustainable Marina Rendezvous (25-26 September 2022) the focus being on building a carbon-free yachting future not just for the boats, but also the infrastructure and facilities to accommodate them: in other words, virtuous marinas.