Yacht Club de Monaco publicly recognises their best sailors at the annual YCM Awards-Trophée Credit Suisse, a ceremony that precedes the traditional Winter Cocktail to welcome new members. Attended by the Club’s President HSH Prince Albert II of Monaco, this year’s gathering was an opportunity to report on the unifying ‘Monaco Capital of Yachting’ approach initiated in 2012 in the Principality, a forward-looking responsible vision that is a core element of Yacht Club de Monaco’s public service remit.

On course towards sustainable yachting

After warmly welcoming new members to the Yacht Club de Monaco family and praising the Club’s performance and proactive response to the global situation, the Club’s President briefly recalled the latest measures taken to ensure a healthy safe environment in the Clubhouse, including UV lamps and air filters, a first for the Principality.

As 2022 will mark the 10th anniversary of its ‘Monaco Capital of Yachting’ initiative, the Sovereign is keen to define a road map for yachting in Monaco. “I want us to redouble efforts to protect the oceans which are our playground. A sustainable superyacht still sounds like an oxymoron today, even though owners are much more environmentally aware”. It was an opportunity to recognise work achieved to date by YCM and Credit Suisse on the SEA Index (Superyacht Eco Association), a benchmark for assessing CO2 emissions of +40m yachts, with the aim of positioning Monaco as a centre of excellence and innovation in the luxury yacht sector.

Increased awareness among professionals is reflected in mobilisation of the young generation through the Monaco Energy Boat Challenge (next edition 4-9 July 2022), organised annually since 2014. “Wishing to look to the future of yachting, our Club has naturally positioned itself as a pioneer of innovation; a player at the service of transforming our sector to meet sustainable development goals set by the United Nations,” explained YCM’s President.

It is through initiatives like these, driven by YCM for the last decade, that the Principality is reaffirming its legitimacy to show the way. “Anchored in our values, daring in action and driven by an eco-conscience, my wish is that through the Yacht Club de Monaco, an established platform for exchanges, we can go even further to reinvent ourselves.  We are arriving at a major turning point in history. Our decisions today will determine our lives tomorrow. It is not just one facet of yachting that needs to be improved, the whole ecosystem needs to be revamped,” declared HSH Prince Albert II, who believes this ambition is achievable by implementing concerted, collective action by all those involved in the industry, like the many professionals federated in the Cluster Yachting Monaco.

The Sovereign went on to formalise Yacht Club de Monaco’s embarkation alongside Boris Herrmann (5th in the last Vendée Globe 2020/2021) aboard Malizia 3, in another five-year campaign. YCM Vice President and founder of Team Malizia, Pierre Casiraghi, presented highlights of a programme that includes the Route du Rhum in 2022 and the team Ocean Race in 2023, culminating in the Vendée Globe 2024/2025.

“Malizia 3 is still under construction and the process should be completed during the summer of 2022. We have opted for a few new features, particularly on the hull. The IMOCA is designed to better manage the swell. We have also worked on the cockpit which has been redesigned, and looked into a new type of battery, photovoltaic panels and hydrogen,” explained Pierre Casiraghi.

The first rendezvous is 6th November 2022 in Saint-Malo for the start of the Route du Rhum, with not one but two boats flying the YCM flag. Oren Nataf is set to participate announcing that he is in “full preparation, supported by a great team including Sidney Gavignet. I am sailing a lot in view of this deadline”.

Sporting challenges at the heart of Club life

Keen to promote all aspects of yachting including motorboats, a special prize was awarded to Tomaso Polli, winner in pole position and 2nd overall at the XCAT World Championship in Dubai on motorised catamarans. 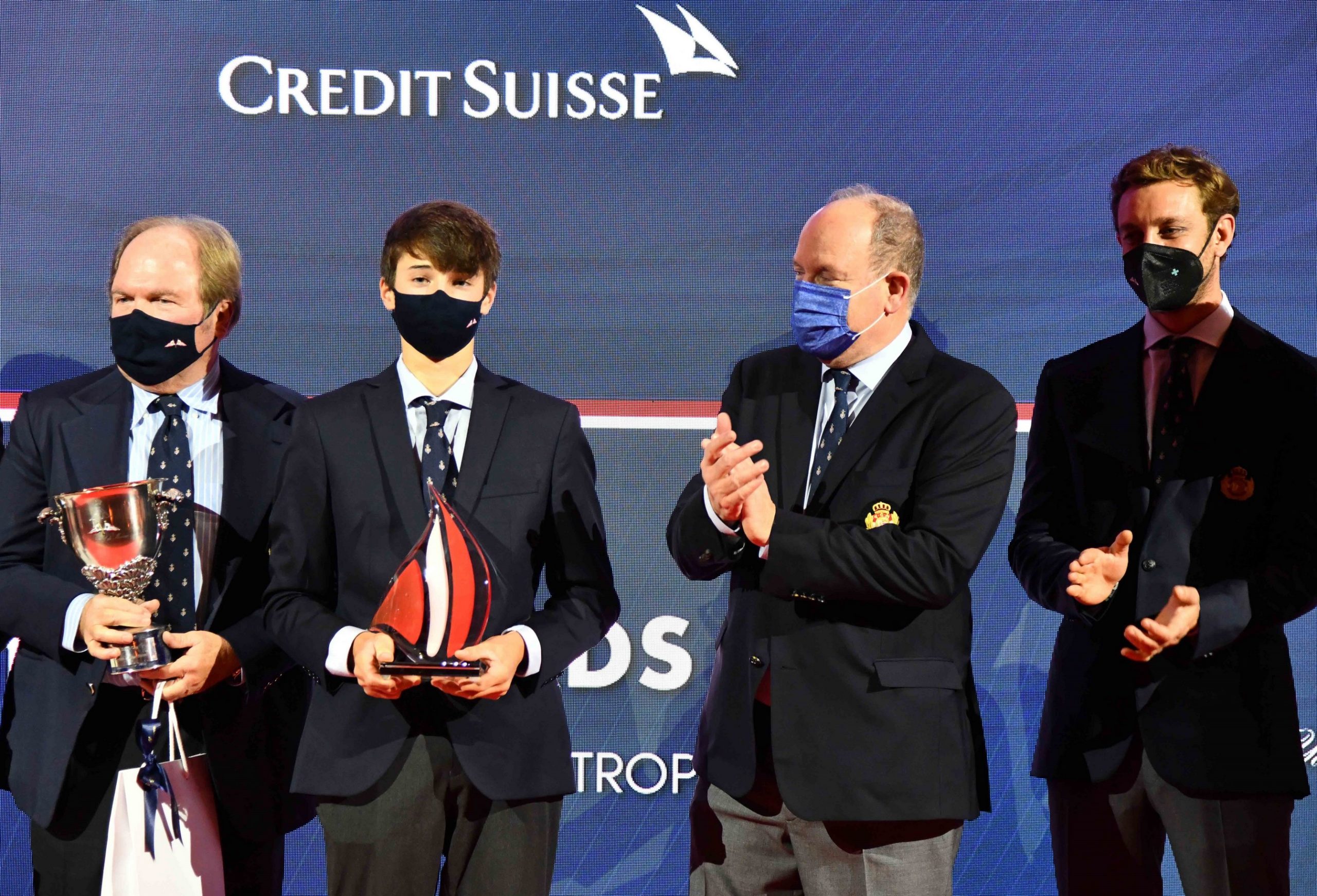 The evening was also a chance to congratulate the many YCM members who compete year-round and excelled in some of the most prestigious events in the world. First in the spotlight were the youngest sailors nominated for the YCM Youth Awards 2021, the big winner being Mathis Duplomb for his progress in ILCA 4 (formerly Laser 4.7). As well as his many podium finishes in League regattas, he shone in France’s internationals to finish 2nd overall.

The ceremony continued with the YCM Awards-Trophée Credit Suisse for adults in the One Design category going to young Francesco Vauban for his impressive Smeralda 888 season, a five-event championship he won for the first time this year. Succession is clearly assured for this class, under Class President, Charles de Bourbon des Deux Siciles.

And the winner is…

A highlight of the evening was the YCM Sailor of the Year 2021 Trophée Credit Suisse. Among nominees were top helmsmen, all YCM members; Nico Poons, RC44 World Vice Champion, Valter Pizzoli, winner of the Régates Royales de Cannes and Les Voiles de Saint-Tropez, Dmitry Rybolovlev, winner in real time of the Rolex Fastnet Race, and Oren Nataf, real time winner of the RORC Transatlantic and 2nd in the Rolex Fastnet in the MOCRA category, and Guido Miani for his victories in the 2021 Rolex Giraglia and Palermo-Montecarlo. 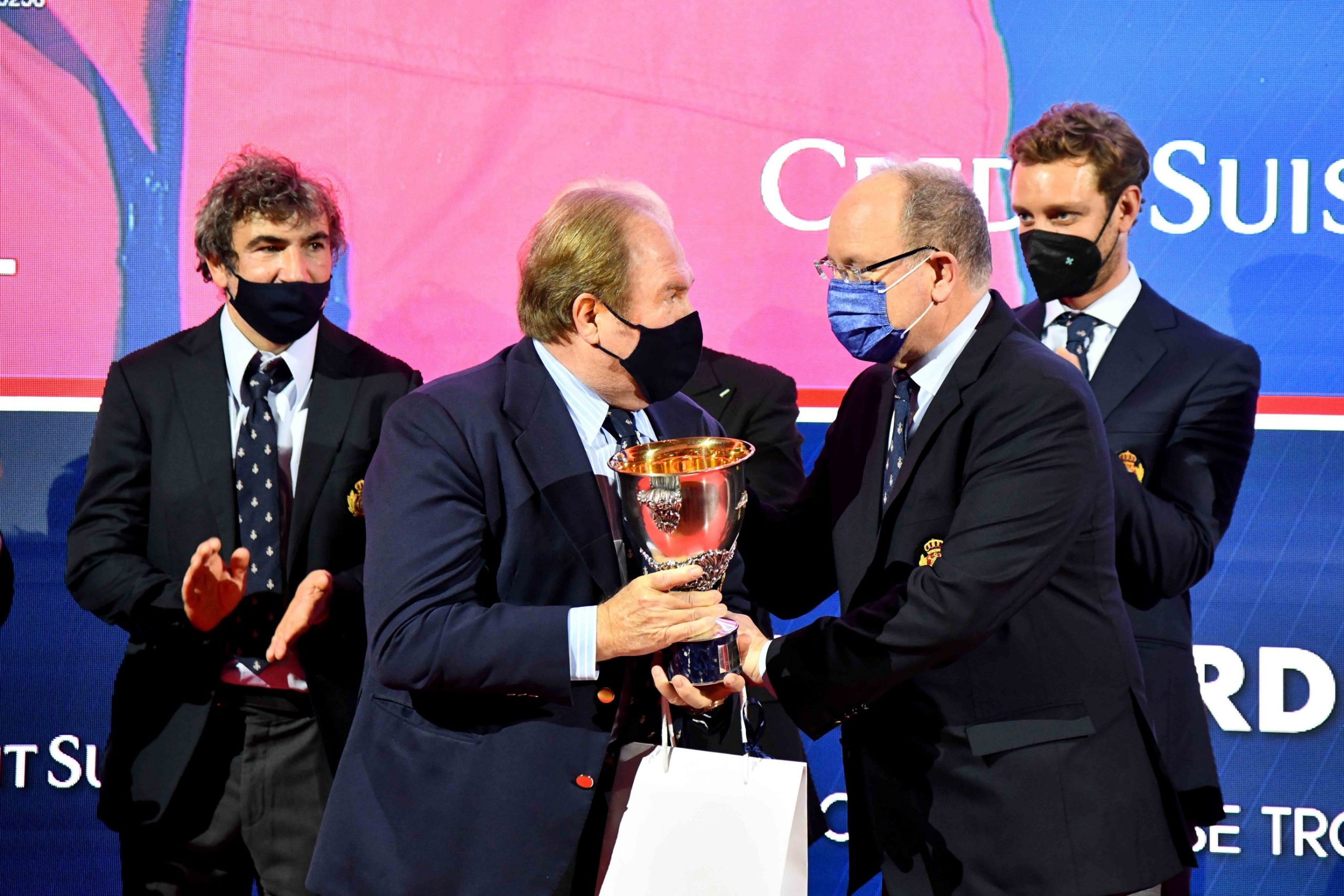 This year, the coveted trophy went to Giangiacomo Serena du Lapigio, a nominee in 2015, 2016, 2017 and 2018 who this year showed remarkable consistency in J/70 and Swan 36, a class he embarked on just a year ago. Winner of the Swan One Design Worlds and of the 37th Primo Cup-Trophée Credit Suisse in the J/70, then in the Swan Sardinia Challenge, Giangiacomo Serena di Lapigio was very touched by this recognition: “I’m delighted to receive this award. It’s fantastic. I love to sail and win with my team and we’re preparing for next season and in particular for the J/70 World Championship which will be held in Monaco next year”.

Proud of its results, YCM is fast establishing itself as an epicentre of major sailing and yachting events, be they sports, business, environmental or innovation. As HSH Prince Albert II concluded in his speech: “The ambitions of the Monaco Capital Yachting approach are big, but they match the challenges”.